Separated by 250 years, unified by opulence, quality and rarity, and on sale at Clare Auction 11th December 2021

Crafted almost 250 years apart, both bespoke creations made by the premier watchmaker of the day and both are ultra rare examples.

Crafted almost 250 years apart, both bespoke creations made by the premier watchmaker of the day and both are ultra rare examples.

In the mid 1760s Jean-Antoine Lepine was appointed clockmaker to King Louis XV, taking over from his father in law, Andre-Charles Caron, to whom Lepine had served as apprentice since moving to Paris from Switzerland in 1744, rising to ‘master horologer’ in 1762 and marrying Capon’s daughter along the way.

Between 1756 and 1769, the two men were associates under ‘Caron et Lepine’ although they appeared to work independently as there are no known examples signing in both names.

This Jean-Antoine Lepine pocket watch is likely to have been commissioned by the royal house between 1750-1760 and intended to be a gift from King Louis XV to an unknown person. It is similar to those in the collection of the Château de Versailles although we have never seen an example with both the fleur-de-lys crown design and a portrait.

The female subject in the portrait is unknown, but bears similarities to portraits on other pieces of the time. It is possible that it is an image of Jeanne-Antoinette Poisson, better known as Madame de Pompadour, The King’s favourite mistress.

It is rare for early examples of Lepine’s work to come to market, one other fleur-de-lys example, without portrait, was sold in Paris in 2021 for almost €20,000.

Fast forward 250 years and the premier jeweller and watchmaker of the day decides to honour the centenary of the birth of their first mass produced men’s wristwatch.

Cartier, referred to as "the jeweller of kings and the king of jewellers" by Edward VII, first produced what would become the Santos wristwatch with it’s iconic square dial and highly legible design, when, in 1904, Albert Santos-Dumont complained to Louis Cartier about the unreliability and impracticality of using a pocket watch whilst flying. The Santos would become a staple in the Cartier line up from 1911 onwards.

In 2004, the Santos 100 saw a reworking of the classic design to include modern materials, different sizes and some special models including chronographs. 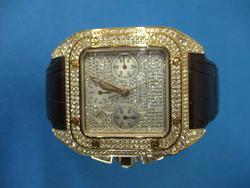 This Cartier Santos 100 Chronograph 2935 model is a rare example. Whilst most of the Santos 100 range was created in stainless steel, some with gold bezels, this example is crafted from 18k rose gold with an 18k bezel and 18k clasp fitted to an alligator strap.

To add to the opulence, Cartier offered an option for the addition of diamonds to the bezel, the dial and or the case. In this instance all three areas have been ‘fully iced’ with brilliant white diamonds and, as if that is not enough diamonds to satisfy, the seven sided crown is set with an estimated one carat diamond. 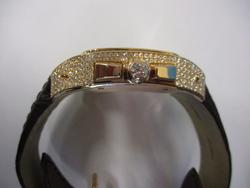 All of this makes this piece particularly rare, but there is another distinction that raises this from rare to ultra rare and maybe unique. Unlike every other Santos 100 Chronograph we have seen, the dial on this example has no hour markings, making room for even more diamonds and giving a clean, beautiful finish that blends world class jewellery and watchmaking into one show-stopping piece. 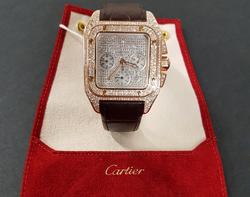 Both watches will be available for sale at Clare Auction on 11th December 2021 alongside 30 other time pieces. Visit the catalogue at https://bit.ly/3Ec8Nab